The planet Saturn entered its home sign of Capricorn on December 20th 2017, where it will remain for about three years. This ingress happened just days before the Capricorn solstice, the annual sun-stop that marks the shortest day in the Northern hemisphere and longest day in the Southern hemisphere. Capricorn and Cancer, the signs which mark the two annual solstices, are thus associated with the extreme height and diminishment of the Sun’s light. In western astrology, developed in the Northern hemisphere, it is taken for granted that the Capricorn ingress is associated with the Sun’s greatest diminishment. Because of this Capricorn is associated with winter, darkness, decay, the stark landscape marked by the skeletons of leafless trees, and Saturn. Cancer on the other hand became associated with prevailing light, fertility, the fertile waters of the world, the Mother Goddess, and the Moon. The Cancer/Capricorn axis marks the extreme turning points of the Sun in a year, and the two signs share meaning with one another because of it. Let’s take a look at some of the themes that will define the next three years.

First let’s look at the traditional meaning of Capricorn, Saturn and Winter. Winter in many places is the most dangerous time of the year; the abundance of Spring and Summer has waned and the work of Fall has ended. In many places it is time for hibernation, storytelling and the hope that food supplies will last until Spring. Winter is a time when your preparation efforts in the past come back to you. The struggle to persevere and make do with less is a core theme. Winter is of course a time of darkness, and Saturn as the lord of darkness was seen as the natural adversary to the Lights or the Sun and Moon. Because the Lights brings life, healing and abundance to the world, Saturn was seen to bring death, loss and hard truths. Yet, everything must die eventually, and it has also been said that death is the great ally to life.

Saturn was said to rule old age, and all those who endure long enough to live to it. Elders are often the ones with most important stories to tell, because they remember times past and have gained the wisdom to speak of history. It is often those on their deathbeds who speak the wisest words. This quality of respect and reverence is very important to Saturn. Our elders are our teachers, and what they pass on to us is tradition. Tradition informs the structure of our lives, including everything from our social patterns to our diet. Tradition sets structures and limits on our lives, a kind of confinement to our cultural inheritance; yet there is also honor here. Saturn also rules the physical structures of our lives: earth, stone, concrete. Like the skeletons of trees revealed in winter, Saturn rules the bones in our bodies. It is all that is dense and hard; and when the fluff of life and spring is stripped away, we see what we could not see before – deep into the thicket of life. Saturn decays excess, and only the most vital core remains: the cold, hard truth. This wisdom, often only granted to those who endure suffering and loss, is to see into what truly matters; the inherent structure of being that defines our lives. Is it love, fear, matter or something else?

We can’t ignore the fact that in the southern hemisphere, Capricorn corresponds to the Summer solstice, and there is wisdom that we can gleam from this. We know that the constellation of Capricorn was imagined as the Sea Goat, a kind of mythic beast that climbs from the primordial waters and ascends the mountain. This ascent of the mountain is well talked about in astrology, particularly because of the twelve letter alphabet and Capricorn being assigned the 10th house, or the point of high noon. Interestingly enough on the Summer solstice in the southern hemisphere at high noon, the Sun is always in Capricorn, so perhaps we don’t need to rely on the twelve letter alphabet to explain the Capricorn connection with ascension. It can be seen right in the solstices. The impulse to climb and ascend is analogous to achievement and success; the hard work it takes to make it to the top. But as the saying goes, the top is often lonely (Saturn’s signification of isolation is relevant here), and eventually you will have to descend. Mountains are marked as sacred sites by people all across the globe, and many people who choose to make the ascent are looking for spiritual connection to the Gods. Otherwise, mountains are protected from warring communities if the people there can endure the tough conditions: less food, thinner air, and colder temperatures make them harsh climates. Saturn is connected to all those who ascend whether they are seeking wisdom, sanctuary, or success. The reward from making the climb to the summit is clarity, integrity and reverence; these skills can lead to leadership positions. If success is devoid of higher wisdom, Saturn is a harsh judge and it’s a long fall from the top.

The Cancer/Capricorn axis is formed through complementary and balancing forces: the starkness of Saturn is complemented by the grace of the Moon. However, these archetypes actually work together. When you can go back to Sumerian times, you find the Sea-Goat (the symbol of Capricorn) as the sacred animal of Enki (or Ea). Enki can be translated as Lord Earth, and he was born of the Sea and Sky. Not surprisingly, “one of His epithets is Nudimmud, or ‘He who Creates’… Enki gives form and substance.”[1] “Enki/Ea was customarily depicted as a seated divinity wearing a long beard, a horned cap and a long pleated robe, wavy streams of water (sometimes with fish within them) flowing from his arms and shoulders to the ground.” [3] This is all aligned with our understanding of Saturn in Capricorn as creator or shaper, but there is more to the story, because “Enki bestows the powers of the fertile sweet waters upon Mesopotamia.”[1] He is the lord of the subterranean waters of Abzu who brought them to the land in the form of rivers, lakes and rain. Enki becomes the lord of irrigation and agriculture when he brings water to the barren Earth; a parallel that exists with Saturn who is also lord of agriculture 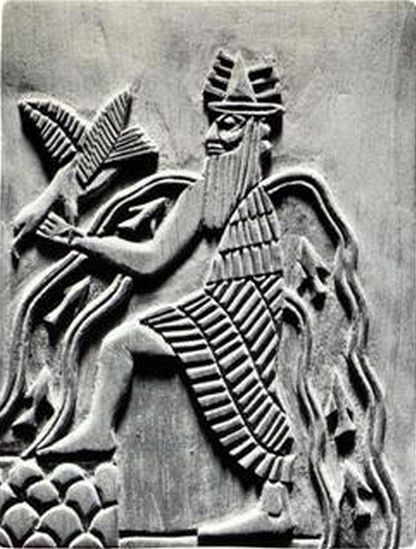 Enki has a partner in creation, the Mother Goddess Ninhursag, who is connected with the Earth itself and births humanity; it is through her womb that his creations are made manifest. Although Ninhursag was not the same as the Sumerian Moon God, she does correspond with our notion of the Moon and Cancer as the Divine Mother. Suddenly the story of Capricorn/Cancer is shifted into a realm where Capricorn brings the primordial waters/seed into the womb of the Mother. The stark difference between the Moon and Saturn softens. The fertility of the land requires the digging of trenches for irrigation; struggle is inherent in creation. Enki’s role as a god is further complicated by his role in population control through plagues and the harsh conditions of human life; and his action to save humanity in the Sumerian flood myth [2]. He was also considered a decrier of fate, ruler of divine law, wisdom, and magical arts and intimately connected with the structuring of society. [4] Most of these are familiar Saturn traits. Keeping all of this in mind, the Cancer/Capricorn axis is certainly one of creation, growth and ascension, but also one of diminishment and tempering; that which becomes too abundant, must be starved; work and struggle accompany the generative process; and when our desires have consumed us, we turn to Mother Earth to heal us as Ninhursag did Enki. [5] These themes can be recognizable as the natural cycles and laws that govern the Earth and its people. Thus it is Saturn’s domain to give life and take it away.

All of this is to say that the next three years of Saturn in Capricorn will be a time of creation and destruction. Those areas that have grown past abundance and into excess will likely face starvation. In our individual lives, we will face the struggle to generate life, and we may find the power to do so if Enki and Ninhursag will it. One of the reasons Enki spared humanity in the great flood was the pious dedication of a disciple who heeded his instruction; an interesting parallel to our current times. In the coming years look for refuge and sanctuary where you can; struggle to dig irrigation channels into your life, and pray that the fertile waters may wash over your land bringing abundance and joy. Pay attention to the larger structures that you are a part of and notice the traditions that you choose to carry forward. Let die what is ready to let die and grow what is ready to grow at this turning of Saturn’s cycle.

This recent new moon was opposite Saturn, and now Saturn burns brightly in the midnight sky at zenith. I spent some time during the new moon reflecting on Saturn and loss. How when someone dies, the force of their life ripples out and makes unalterable changes in the lives of those they knew. This loss also holds within it the fullness of life, the joys, the sorrows. I see this in death, the twofold emptiness and fullness. Saturn is the same. Sometimes with Saturn we are gutted, at least it seems, but our spirit rises to fill the emptiness. It takes time to sit with the sorrow and grief but it is not empty. There is so much life living within the halls of hollow death. Much love.
Medea,
Blessed Beltaine to you all. 🌼🌧☘️🌹❤️🌸🌱💧🌞
In case you needed reminding...
I was sitting here
Sometimes it feels like
Prayers of sovereignty for this eclipse and Reclamation of inner light
Experimenting with sharing my voice more. An improvised song about the soul, recorded at sunset around the winter solstice.
Loading Comments...